Why Breast Cancer Now UK is Our Chosen Charity

McCarthy Browne is incredibly proud to present Breast Cancer Now UK as our chosen charity. For every new female client that signs up for our monthly packages, 10% of their first month’s fees will be donated to Breast Cancer Now UK. For those who follow our social media, you would have seen several posts about breast cancer and the terrible impact it has on people.

This blog delves into a more personal story of breast cancer and the impact it has on both its victim and their spouse. The story will be told from Karen Hyett’s point of view, a very brave lady who is currently fighting her hardest against breast cancer. It will then be told from her partner, Mathew Hyett’s point of view. I hope this inspires you like it has us and shows you the importance of our charitable stance and donations.

When it came to ‘discovering’ I had breast cancer, it wasn’t myself. I also wasn’t of the age for regular Mammograms. My husband noticed a dimple in my breast whilst I was in the shower one day in March 2021. If it hadn’t been for that one moment, I dread to think how long it would have gone unnoticed, and the difference that would have made to my story.

Following my husband’s discovery, I booked myself in at the doctors, where they found a lump quite deeply buried. They referred me, and straight away the hospital told me they thought it was cancer. In April, I had a biopsy done, then was told to go away for a week. They couldn’t confirm it was cancer until the biopsy results returned, but I was told to prepare for the worst. They also predicted at that point it would potentially be in my lymph nodes.

In my first appointment, I had a mammogram, ultrasound, and biopsy. On my second visit to the hospital, which was also in April, they confirmed it was cancer and that it had traveled into my lymph nodes. They also wanted to do a biopsy on my ‘good’ boob as they had found something they weren’t sure of, thankfully this was nothing to worry about. I was told of my mastectomy and that if the results had suggested it was in my other breast that it would also be taken at the same time.

Suddenly, things were happening so quickly. On 21st May 2021, I had a single mastectomy. The cancer I had was stage two, as it had traveled into my lymph nodes. During the operation, seven were removed, but it was discovered only two were infected.

What followed my mastectomy?

Just as I physically started to recover from my mastectomy, I started chemotherapy. I had thankfully healed quite well from the operation. Chemo at first occurred once every three weeks. Then after a couple of months that changed to weekly sessions, with 12 booked in. I am due to finish on Christmas eve.

After my chemotherapy ends, I get three to four weeks off, then at the beginning of February, I will be booked in for Radiotherapy. I will go for this every day for three weeks.

I can’t fault the NHS for the treatment and how swiftly it has moved.

The impact breast cancer has had on my life

I launched my cleaning business, then within two months received my diagnosis. This has left my husband, Mat, having to do everything. He runs my business and works long shifts in his other job. My seven-year-old son has also been affected, and he’d already had a turbulent time with the pandemic.

I am hopeful though; I’m going to kick ass. For Toby’s sake, I do try and pretend I’m not in as much pain as I am. I’ve got to make it as normal as possible for him, and on those hard days, I still plant a fake smile on my face for his sake.

I’m grateful that I’ve not been too bad physically with the chemo, asides from feeling very tired and having a few sick days. However, I have hand and foot syndrome, which is very painful, and my feet feel burnt. That’s been one of the hardest things to deal with this time around, I find it incredibly painful and have been wearing flip flops in cold weather!

The impact of breast cancer on those I love

Toby has been amazing. He is such a strong seven-year-old. He calls my scar my lifeline. That made it become a positive thing for me. I looked at it early on, the scar. That’s because I knew it would never look as bad as it did that day… that it would change each day and become better. It was always going to look better than it did the day I first saw it.

Toby originally felt negative about the operation, and I felt awful for going against his wishes. McMillion told me to be open with him, so when he wanted to see the scar, I showed him. He said, “Mummy, let’s not call this your scar, let’s call it your lifeline because it saved your life”. His strength and seven-year-old wisdom changed my outlook on something that could have been very negative for me.

Another adorable thing he does is when I am being sick he will appear by my side with a bottle of water from the fridge.

The impact on my marraige

As for my marriage, it’s stronger. I couldn’t have gotten through it all without Mat. I had to let go of the control, as I realised, I ran everything at home. It was me who got everyone to where they should be and organised everything. Since starting chemotherapy, my brain can’t obtain information really, so I can’t keep on top of things like I used to. Now we all help each other out, rather than me being a control freak. I also have reminders everywhere for everything. Right now, I’m letting go of the running of the household, taking a step back, and letting everyone else do it. I just must focus on myself for now. It feels very weird.

Unfortunately, I have lost friends that I’ve known since childhood, they’ve just not been in touch. I don’t think they can handle it. Yet, on the other hand, people who were just acquaintances have really stepped up and helped. I’ve had school mums cooking me meals, painting my nails, and buying me flowers. It sounds silly but it’s then that you realise people care about you. I feel very lucky, although I am sad to have lost some, I haven’t chased. That’s because I don’t want to make them feel uncomfortable, and, I don’t have the energy. I am busy fighting cancer, I can’t deal with their issues right now.

It’s the ones around me that have helped fight this. I do it for them, and they do it because they care. That’s worth the world.

When they first told us, it wasn’t the nicest thing. When you hear that word, all you think of is death, end of life. However, they did a brilliant job of explaining things to us and said it’s one of the better cancers to have, that it’s very treatable. You speak to people and realise how many people have suffered with it and recovered years ago. A lot of the stories are positive. I think you’re brought up to think cancer means the end. That it’s a death sentence, whereas it’s not.

I was expecting Karen to suffer a lot worse through the treatments, but she’s handled it so well. She’s a superstar and very inspirational. I always said at the start she’s stubborn, so I knew she wouldn’t give in and that she’d fight. My aunt had leukemia and fought it all the way whilst remaining positive, which I think helped Karen. Her whole outlook helped to inspire Karen and showed her how to fight it.

I’ve done a lot of winging it, as I’m not quite so organised as Karen. She panics and stresses, whereas the day before I think “Oh shit”, then quickly send some texts and shuffle bits around. I was expecting it to be worse, and to need to rally the troops in daily to take care of her and Toby, but she really has done amazing. Also, Toby has been amazing!

Since the diagnosis, we have tried to spend more time together as a family, like what we managed to do during the lockdown. I would prefer not to be working so many hours, or doing the amount at home but then equally, it’s horrible not being able to do more with the cancer side of things. It’s also hard not being able to understand it the way she does.

I haven’t allowed myself to go down that road too much. She’s stubborn, so at first, it did suck, but I’ve always believed cancer is about your mental attitude. If you have a positive mental attitude, then you will be fine. I think if you give up in your head, it won’t be the same as when you decide you will fight it. Karen was emotional to start with, especially when it came to the thought of not being able to raise Toby but that’s why we said she’d fight it. That was her one reason.

Karen has tried to talk to me about me finding someone else if the time came. But I think it’s a stupid conversation to have. We have briefly discussed the house, but we won’t have those discussions. Not the serious ones. Unless she becomes more ill, they’re unnecessary.

You realise who your friends are. It’s made us feel quite humble, with how people have helped and kept us going. Karen is always smiling, always fun, and says hi to others. She always leaves others happy. And now that’s clear how much of a positive impact she has had on others, as they’ve shown their support in abundance. I am very proud of her. I can’t wait for all this to be over, for her sake.

PrevPreviousShould You Get an Electrical Vehicle for Your Business?
NextHow to Create a Business and Personal Budget for The Year AheadNext 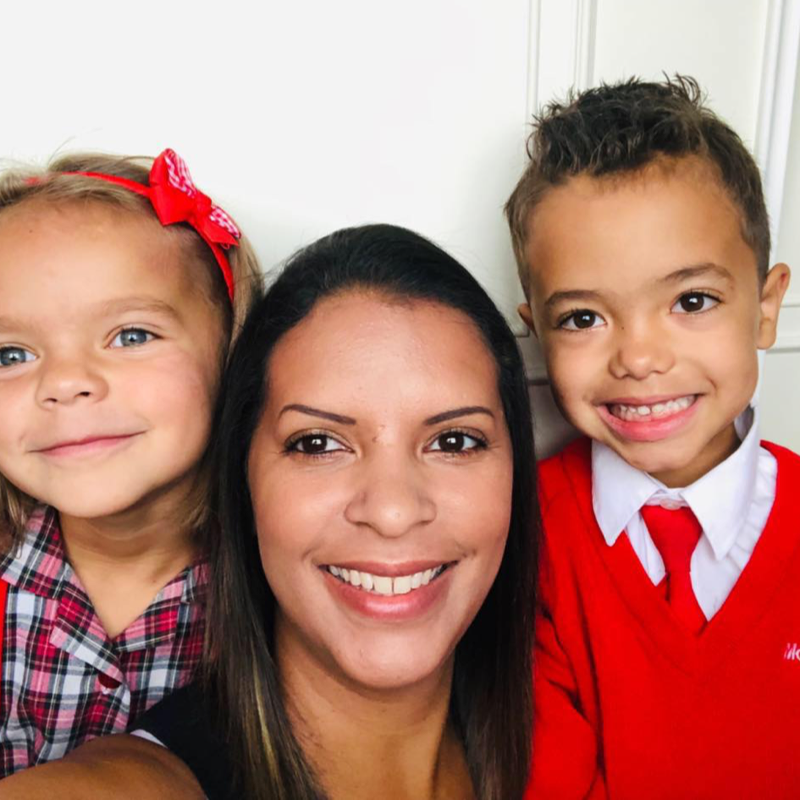 I am a prominent member in a local women’s networking group and am always happy to share my advice and knowledge. I am a strong finance professional with a demonstrated history of working in the financial industry. I have a BA Hons in Accounting and Finance, CeMAP (Certificate in Mortgage Advice and Practice from The London Institute of Finance), CeRer (Certificate of Equity Release) and Financial Accounting, and am QuickBooks certified. Skilled in Negotiation, Business Planning, Customer Service, Certified Mortgage Planning, and Financial Account Management.

Manage Cookie Consent
To provide the best experiences, we use technologies like cookies to store and/or access device information. Consenting to these technologies will allow us to process data such as browsing behaviour or unique IDs on this site. Not consenting or withdrawing consent, may adversely affect certain features and functions.
Manage options Manage services Manage vendors Read more about these purposes
View preferences
{title} {title} {title}